A fun fact about me:  I have been reading Gone with the Wind for over a year now and I’m still only halfway through.  As an English major and a history junkie, it’s embarrassing.  I’m reading in slow-mo.  Patrick’s grandmother, a native Georgian, encouraged me to read the book (and then watch the film) after our trip to visit her in Atlanta last summer.  The Civil War is very much alive in the city, the former heart of the Old Confederacy and a shining example of the New South.  There is so much Antebellum history still standing in Atlanta, despite its burning by both the Confederacy and General Sherman:  the old homes with carriage steps out front, the churches left in tact by the Union, and Stone Mountain, the Confederate version of Mount Rushmore.  For Atlanta, Georgia, a city at the center of the war, such historical significance is expected.  So, I was taken by surprise when the Historical Society of Palm Beach County launched the exhibit By Land & Sea: Florida in the Civil War last September at the Richard and Pat Johnson Palm Beach County History Museum.  I had no idea how important my home state was to both the Confederacy and the Union for supplies and military strategy.  After passing the museum multiple times driving down Dixie Highway (the museum is located in the Historic 1916 Palm Beach County Court House), P and I finally decided to explore the exhibit on its final day, July 2nd.

Here are some interesting Florida Civil War facts that we learned at the exhibit:

Although the By Land & Sea exhibit has ended, it is still worthwhile to visit the Historical 1916 Palm Beach County Court House to learn about the significant restoration done to the building.  ADMISSION IS FREE!  You can even check out the court room, which has been restored to it’s original layout:

The 1916 Court House had only one courtroom when it was constructed.  When the 1927 Annex was completed, the original courtroom had been altered to allow for a third floor corridor from the 1916 building to the new Annex, which went through where the judge’s bench is on the east wall.  During the renovation, the courtroom was reconstructed to its original layout to include the original paint colors.  The fourth floor balcony which overlooks the courtoom was also reconstructed.  Due to segregation, African Americans watching court proceedings were only allowed on the fourth floor balcony. – excerpted from The Historic 1916 Palm Beach County Court House brochure

You can watch a time lapse video of the restoration of the courthouse here.

P and I spent a fun afternoon at the museum and learned quite a few new and surprising tidbits.  For instance, I had no idea that, in 1972, a wrap-around addition was built around the original structure and architecture of the 1916 courthouse!  This addition wasn’t removed until restoration began in 2004.  We recommend the museum to anyone looking for some local history, a break from the beach, air-conditioning, and a glimpse into our county’s past.  Our great state of Florida has more historical significance than we are led to believe – it wasn’t always Disney World and retirement communities. 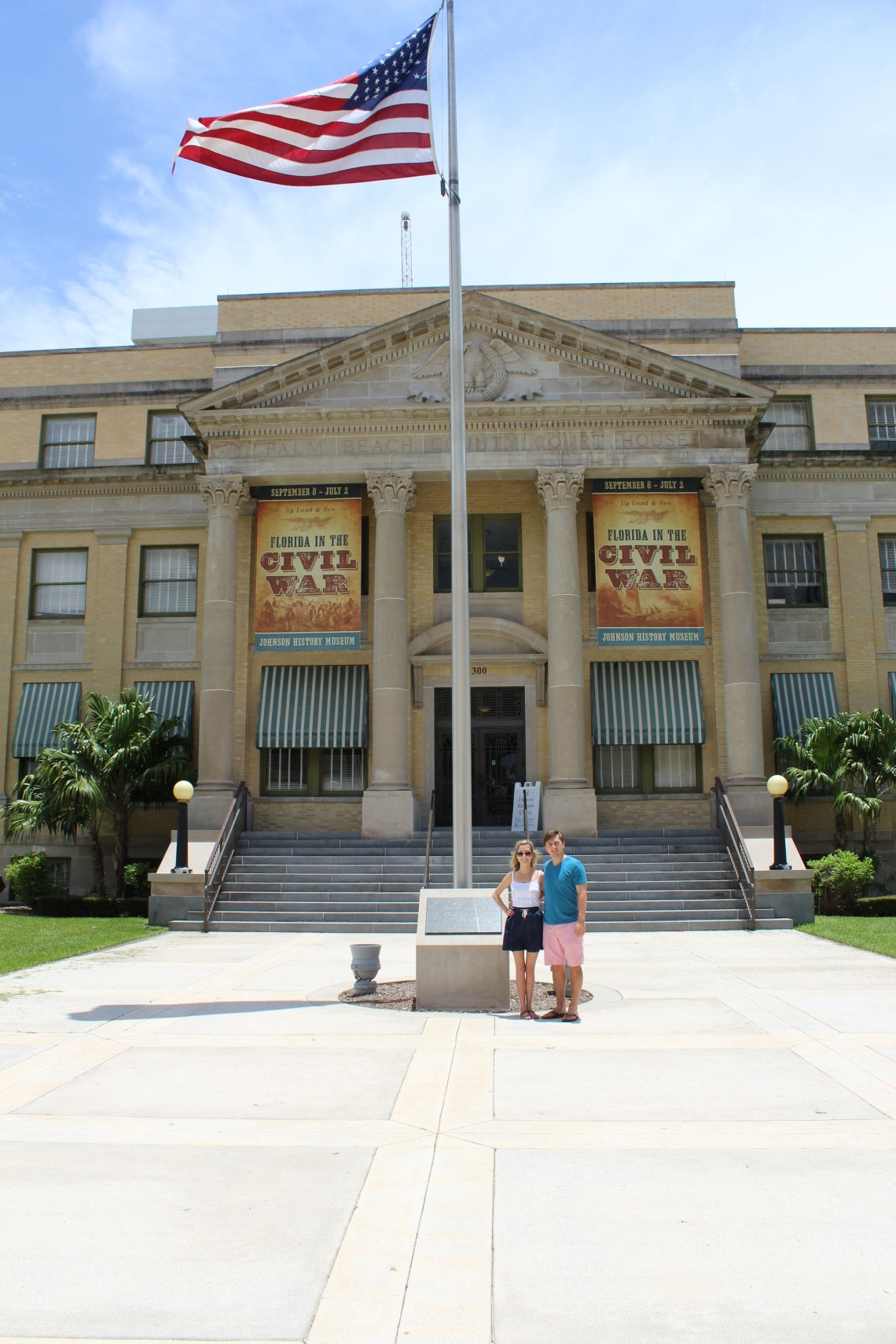 Facts contained in this post about both the Civil War and the Court House restoration are from the Historical Society of Palm Beach County’s website: http://www.historicalsocietypbc.org.

Emily Sawyer McGlon is a Jupiter, Florida native who graduated from Stetson University in 2010 with a Bachelor of Arts in English. She currently lives in Palm Beach Gardens with her sweetie-pie husband, P, and obsesses over all things JUPiter. She's a Florida history lover, a Boat Drink aficionado, and wannabe beach bum. View all posts by JUP Girl